AS NAMES GO, THIS MUST BE UP THERE AMONG THE BEST: strozzapreti means ‘strangle the priest’. Stories tell that after mass on Sunday, greedy priests used to eat so much of this pasta – too quickly – that they choked and suffocated themselves. Shaping the pasta isn’t hard (they’re an elongated version of cavatelli (see page 79) and are made with an eggless dough, so it’s quite hardy to work with, and my tip is to say, use three fingers to roll out eachshape; you’ll see what I mean.

Ricotta has such a mild flavour that you can use it as a canvas – it fades into the background but can also be pepped up by pairing it with stronger tastes.

Here it’s the fennel pollen that gives it a lift. I know the pollen is more expensive than buying fennel seeds but a little goes a long way, and the flavour is stronger yet sweeter than the seeds, giving the ricotta a lovely zingy finish, like a mixture of camomile and liquoric.

150ml hot vegetable stock (or use the pasta cooking liquid)

FOR THE PASTA DOUGH

For the pasta dough, put the flour in a bowl. Make a well in the centre and pour in the water then the salt. Using a fork, slowly swirl the flour into the water, beginning with the inner rim of the well, until a dough begins to form. Gather the dough into a mass, work into a ball, then knead for about 10 minutes, until smooth. Let the dough rest, covered with cling film or a clean tea towel, for about 2 hours.

Divide the dough in half, flatten and cut each portion into 2.5cmwide strips. Using the palms of your hands, roll the dough into ‘ropes’ roughly 2cm thick, then cut the ropes into 5cm lengths. Lightly dust

with flour and place on a floured tray, covered with a tea towel, while you repeat this process with the remaining dough.

To shape the strozzapreti, lay a piece of dough on the surface and pull the dough toward you with three fingers using medium pressure. It should roll as you pull. The first few might be difficult and may

not be beautiful, but don’t worry – shaping gets easier as you develop

a feel for the dough.

Drop the pasta into a pan of salted boiling water and as soon as they float, drain them, reserving the water, if you’re using it for the sauce. Mix the ricotta, olive oil, chilli, basil leaves and stock (or pasta water) and season, then stir the sauce into the pasta.

Transfer to a heated serving dish, sprinkle with the fennel pollen or crushed seeds, drizzle over some olive oil, then add the pecorino and garnish with a couple of basil leaves. 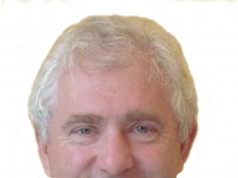 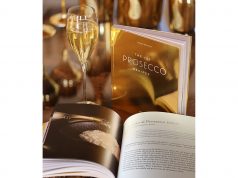 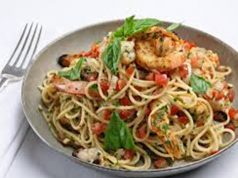