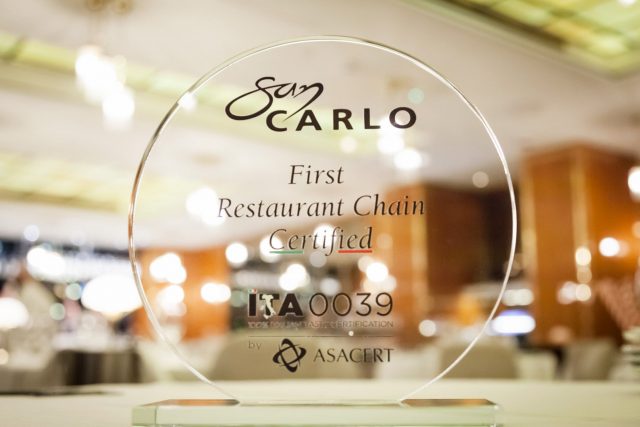 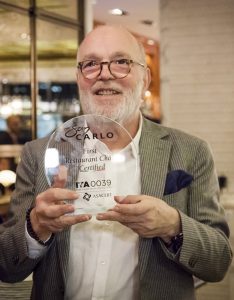 San Carlo Restaurant Group’s portfolio of leading Italian eateries are the first in the UK to be certified as authentically Italian. The group, owned and run by the Distefano family, operates 21 restaurants under the San Carlo, Cicchetti, Fumo, Flying Pizza and Signor Sassi concepts and a further four overseas in Riyadh, Qatar, Bahrain and Bangkok.

The official ITA0039 | 100% Italian Taste Certification, awarded by Italian accreditation body ASACERT, verifies and promotes restaurants which offer a genuine Italian dining experience overseas. The quality mark was developed by ASACERT in a bid to protect and promote real Italian food and wine outside of the country, from distribution through to the restaurant dining table.

Receiving official certification from ASACERT at the Group’s latest opening, San Carlo on Regent Street, St James’s, London, founder and chairman, Carlo Distefano, said: “On behalf of my family and restaurant teams we’re thrilled to be recognised as truly Italian, there’s no greater honour. For Italians food isn’t just fuel, it is life, it’s part of our DNA and seeing diners here share our joy for our food and drink is what drives us. The San Carlo story begins in Sicily, the birthplace of Carlo Distefano. A tale of entrepreneurial success, Carlo arrived in Britain in 1962 aged 17, with £12 in his pocket, a work permit and the promise of a job at a barbershop. A self-confessed workaholic, by the age of 20, Carlo opened his first joint business venture, a hairdressing salon in Leeds; he also had interests in a coffee bar and disco. But food was always to be Carlo’s primary passion, working six or seven days a week, any free time would be spent in London where he’d dine at the most lauded 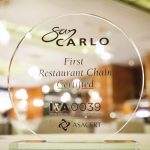 restaurants in the city – including the Savoy, the Dorchester and Simpsons. It was here that Carlo’s passion for great food, style and service became his driving force. In 1992 Carlo opened his first restaurant in Temple Street, Birmingham, then a humble 20 table restaurant. Celebrities, sporting stars and loyal diners made San Carlo their restaurant of choice and soon Carlo had a success on his hands, Bristol opened in 1996, Leicester in the late 90’s and then Manchester, which has gone on to become possibly the highest profile, busiest restaurant outside of London.

Joined by two generations of the Distefano family, the San Carlo group of award winning contemporary Italian restaurants has grown to become a £60 million restaurant empire which currently numbers 16 authentic Italian restaurants across the UK – from Covent Garden, Piccadilly and Knightsbridge Green in London to Bristol, Leicester, Liverpool Leeds, Cheshire and Manchester and with a growing number overseas – including Kuwait, Bangkok and Qatar and with new sites set to open in Bahrain, Dubai and Riyadh. 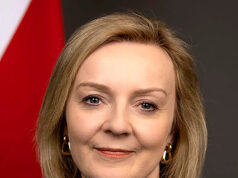 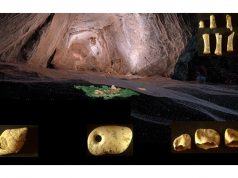